OTT streaming to hit 100MN subs by 2015 | OTT | News | Rapid TV News
By continuing to use this site you consent to the use of cookies on your device as described in our privacy policy unless you have disabled them. You can change your cookie settings at any time but parts of our site will not function correctly without them. [Close]

Established players such as Sky Europe and Netflix, allied with new services from HBO and Sling TV, are driving a new era of streaming entertainment, according to analyst Ovum. 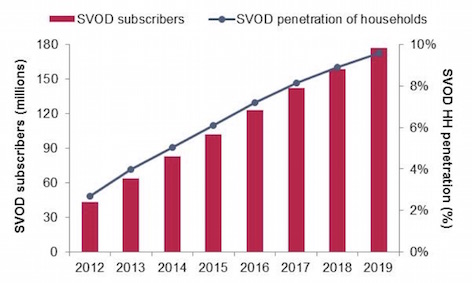 In a review of the global video industry, including what Ovum says may very well be the worlds' first over-the-top (OTT) video platform usage analysis conducted across active devices, Ovum suggests that the new direct-to-consumer initiatives — such as HBO Now, CBS All Access and DISH's Sling TV — will bring to the market premium, stand-alone services based on content once exclusive to traditional pay-TV. Indeed it sees a key trend the proliferation of stand-alone OTT services launched by traditional TV players. Ovum expects such players will see a reassertion of the traditional TV value chain, pushing back against technology-led OTT specialists such as Amazon, Netflix and Hulu, and driving the global total of online streaming subscribers past 100 million in 2015, with a further 77 million more expected by 2019.

"Until now, watching the latest Hollywood movies and TV shows has largely been the preserve of downloads, discs and pay-TV," said Tony Gunnarsson, a senior analyst in Ovum's TV practice. "What we're seeing in maturing markets such as the US is that the audience is shifting towards premium linear streaming, which is augmenting well established free on-demand services such as YouTube. Home entertainment is evolving as subscription-based VOD services reach the mass market: it is now commonplace to watch original productions such as Bosch from Amazon's Prime Instant Video streamed to the main TV. The emergence of stand-alone – often linear – streaming propositions such as PlayStation Vue and Yaveo represent the first that truly substitute for traditional pay-TV."

Yet despite its general optimism for the market overall, Ovum warned that an already 'unforgiving' competitive environment will intensify and that services which fail to understand the increasingly complex array of choices available to the audience will struggle against those that address the need for connectivity, perhaps in hardware as well as content. Moreover, it expects much downward pricing pressure as the multi-play offers will ruthlessly discount bundled services that lie outside the core business of the seller.

"We are on the cusp of the next major evolutionary growth phase in visual entertainment," added Ed Barton, Ovum's head of TV research and analysis. "As the industry hunts for opportunities to address slowing traditional TV subscription revenues, the major trends in technology, audience consumption, and service evolution offer glimpses of a brighter future. We see a shift in how TV is increasingly addressing individuals rather than households, and how the merging of online and broadcast advertising technologies and the on-going hunger for true 'Martini TV' – any time, any place, anywhere – from the audience offers significant incremental revenue opportunities. The proliferation of linear SVOD from traditional TV is just one part of this shift which underpins our firmly held view: TV's best days lie ahead."