Nielsen: TV faces increasing competition from other media | Second Screen | News | Rapid TV News
By continuing to use this site you consent to the use of cookies on your device as described in our privacy policy unless you have disabled them. You can change your cookie settings at any time but parts of our site will not function correctly without them. [Close]

Nielsen is working to total up audiences across devices and burgeoning viewing platforms — and has found that there are plenty of things competing with TV viewing. 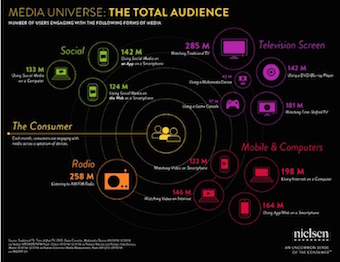 It has found that in Q4 2014, traditional TV reached an average of 285 million viewers each month, with more than 181 million of these consumers watching time-shifted TV. In terms of mobile and computer users, 122 million viewers watched video on a smartphone, 146 million watched video on the Internet and 164 million people used an app/web on a smartphone. Radio is also a vibrant means of engaging with content, reaching 258 million listeners per month.

“The current state of the media universe is much like that of the cosmos,” Nielsen noted in a blog. “The rise in technology and TV-connected devices has given consumers—and thus programmers, marketers, agencies and advertisers—a vehicle for boundless choice.”

While the average American adult spent nearly a week (149 hours 14 minutes) on average watching traditional television each month in fourth-quarter 2014, other ways to connect with content were in full effect—something that advertisers should take heed of.

In that same quarter, U.S. adults spent well over 15 hours each month watching time-shifted content, close to 30 hours using the Internet on a computer, and over 43 hours using app and the Web on a smartphone. In addition, consumer’s monthly time spent listening to radio was also a resounding 58 hours and 36 minutes.