MLS nets second European content deal | Pay-TV | News | Rapid TV News
By continuing to use this site you consent to the use of cookies on your device as described in our privacy policy unless you have disabled them. You can change your cookie settings at any time but parts of our site will not function correctly without them. [Close]

Days after sealing a similar deal with Sky in the UK, Major League Soccer (MLS) has signed an agreement with Eurosport to broadcast matches in all other European territories. 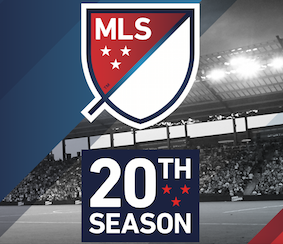 The four-year deal will run from 2015 to 2018 and includes exclusive TV and digital rights for all regular season matches, the AT&T MLS All-Star Game, MLS Play-Off matches and MLS Cup. Games will be broadcast on both Eurosport and Eurosport 2 and made available through the Eurosport Player, Eurosport's online subscription service. Up to four matches will be broadcast live each weekend on Eurosport and Eurosport 2 including one match live on Sundays at 11pm CET and one match live later at 1am CET.

"It is a pleasure to be able to announce our support for the long term vision of the MLS. We see the recent signings of Steven Gerrard and Frank Lampard as further proof of the willingness of the league and its owners to invest in globally recognised names," commented Eurosport Group CEO Peter Hutton. "This can only help us grow the MLS internationally, where we will look to show the league both live and in prime time to reach the maximum possible European audience. As we continue to improve the quality of Eurosport across the region, the new deal with the MLS is a significant step to increase our live football content as well as a sign of our belief in the potential of the league to continue to grow".

In its UK deal, Sky Sports will broadcast at least two MLS regular season matches per week, as well as the AT&T MLS All-Star Game, all MLS Cup Playoff games and MLS Cup on the Sky family of networks. The UK-based broadcaster will also carry weekly MLS highlights across its various platforms, including Sky Sports News and SkySports.com.