Apple TV fades away in streaming video player market | Online Video | News | Rapid TV News
By continuing to use this site you consent to the use of cookies on your device as described in our privacy policy unless you have disabled them. You can change your cookie settings at any time but parts of our site will not function correctly without them. [Close] 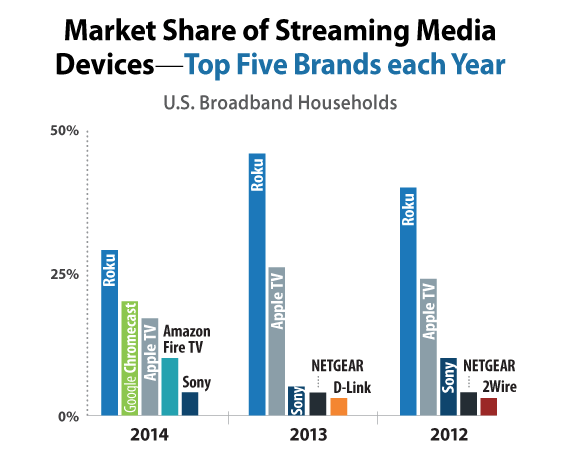 The firm has found that a full 10% of US broadband households have purchased a streaming media device - be it a set-top box (STB) or dongle/stick - in the first three quarters of 2014, already matching total sales from 2013.

Roku is still the leading brand with 29% of sales, but Google Chromecast (20%) has supplanted Apple TV (17%) in second place. New entrant Amazon Fire TV is in fourth place with 10%. Consumer content choices are also increasing, with Showtime and Sony planning to launch their own OTT video services to compete with Netflix and HBO.

"Nearly 50% of video content that US consumers watch on a TV set is non-linear, up from 38% in 2010, and it is already the majority for people 18-44," said Barbara Kraus, director of research at Parks Associates. "The market is changing rapidly to account for these new digital media habits. Roku now offers a streaming stick, and Amazon's Fire TV streaming stick leaves Apple as the only top player without a stick product in the streaming media device category."

In 2013, Roku accounted for nearly one-half of streaming media players (46%) purchased in the US, while Apple had 26%. Both Roku and Apple have seen their shares of purchase decline with the launches of Google Chromecast and Amazon Fire TV.

"Their low cost will make streaming media devices popular gifts this holiday season, and the race to meet consumer demands for online video will make this product category a very hot topic at the 2015 International CES," Kraus said.