Worldwide TV revenue up, with OTT, VOD set to dominate | Media Analysis | Business | News | Rapid TV News
By continuing to use this site you consent to the use of cookies on your device as described in our privacy policy unless you have disabled them. You can change your cookie settings at any time but parts of our site will not function correctly without them. [Close]

Worldwide TV revenue up, with OTT, VOD set to dominate

With the TV and video market in the throes of major upheaval and growth thanks to more on-demand choices, pay-TV and over-the-top revenue both look poised for healthy growth through 2018. 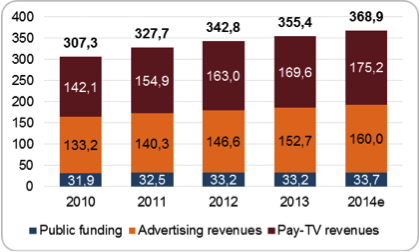 That’s according to research firm IDATE, which says that the good news is that television revenue worldwide will increase from €368.9 billion in 2014 to €424.7 billion in 2018, which translates into an average 3.6% annual growth, compared with the 5% reported between 2010 and 2013.

Advertising revenue meanwhile is expected to enjoy more dynamic growth overall, in line with its trajectory in recent years: 4.8% a year up to 2018, compared with 4.6% per annum over the past four years, to reach €193 billion in 2018. And funding from TV licensing fees will continue to increase significantly, by an average 1.5% a year, to reach €36 billion in 2018.

Revenue growth for the global video market is however being stunted by the inexorable drop in video hard copy sales. The hard copy market will continue to shrink across the globe, losing close to a quarter of its value in 2014, despite the growth of Blu-ray. Video on demand rentals will continue to be the central model on managed networks, generating €4.7 billion in revenue in 2018, compared with €3.3 billion in 2014. In fact, VOD revenue will climb to €34.4 billion in 2018, thanks to a solid and steady increase in uptake (131.5% compared with 2013), and will represent more than double hard copy sales (€15.5 billion in 2018) by that time.

OTT video will consolidate its dominance of the VOD market, accounting for more than 80% of on-demand revenue, IDATE said. And despite the popularity of premium cable channels, Netflix’s customer base grew by 71.4% between 2010 and 2013, the firm said.