Millennials driving 'drastic' changes in TV viewing | News | Rapid TV News
By continuing to use this site you consent to the use of cookies on your device as described in our privacy policy unless you have disabled them. You can change your cookie settings at any time but parts of our site will not function correctly without them. [Close]

As TV viewing becomes increasingly fragmented with a wider array of devices and content sources, the behaviours of Millennials and other tech-savvy groups are accelerating the rate of change in the industry says research firm comScore. 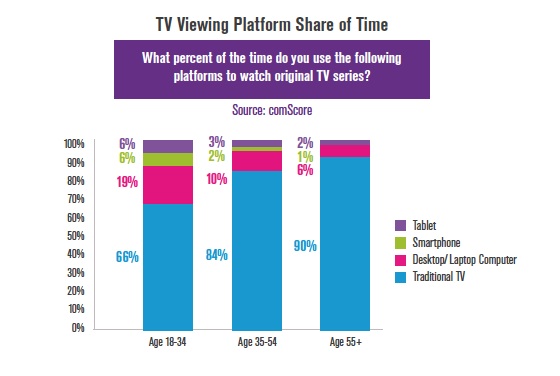 In its US Total Video Report, the analyst found that generally speaking, the older the viewer the greater percentage of time spent watching on traditional TV sets. Yet crucially it also revealed that the key Millennial grouping, that is those aged 18-34 year, spent as much as a third of their original TV series consumption time watching on digital platforms, with computers driving the majority of that activity. In fact a sixth of Millennials said they did not watch any original TV series from traditional TV sets within the past 30 days, a significant trend highlighting the potential for linear TV viewing to erode over time. Since this age group was considerably less likely to watch TV via a TV set, comScore suggested, it was not surprising to see that their incidence of viewing this content on computers (44%), tablets (49%) and smartphones (31%) was considerable and substantially higher than older age segments.

Millennials were also significantly more likely to watch TV from a connected device such as a Roku, Apple TV, Google Chromecast devices as well as via a gaming console (eg Xbox, PlayStation, etc) or Blu-ray Player. The inference to be drawn, said the analyst, was that when Millennials do watch original series content on a traditional TV set they often do so through a digital connection and content streaming.

The report also provided firm evidence for the growing strength of online video. More than half of all viewers across all age groups cited schedule flexibility and convenience as the main reasons for watching TV content on the Internet. These edged out all other reasons, including the ability to skip commercials, the ability to binge watch and the lower cost for consumers. When segmented by age, a significant portion of older viewers said they might only tune in online after they missed an episode on regular TV, while their younger counterparts are more likely to proactively seek out shows on the Internet for other reasons.

Vindicating the huge investments made by the likes of Netflix and increasingly Amazon, the US Total Video Report found younger generations were more likely to watch an original series online, with 45% of them watching via the Internet, including 13% doing so exclusively. By comparison, just 17% of people age 55+ watch at least some original TV series content online.