ESPN sees massive spike in digital, social traffic | Social TV | News | Rapid TV News
By continuing to use this site you consent to the use of cookies on your device as described in our privacy policy unless you have disabled them. You can change your cookie settings at any time but parts of our site will not function correctly without them. [Close] 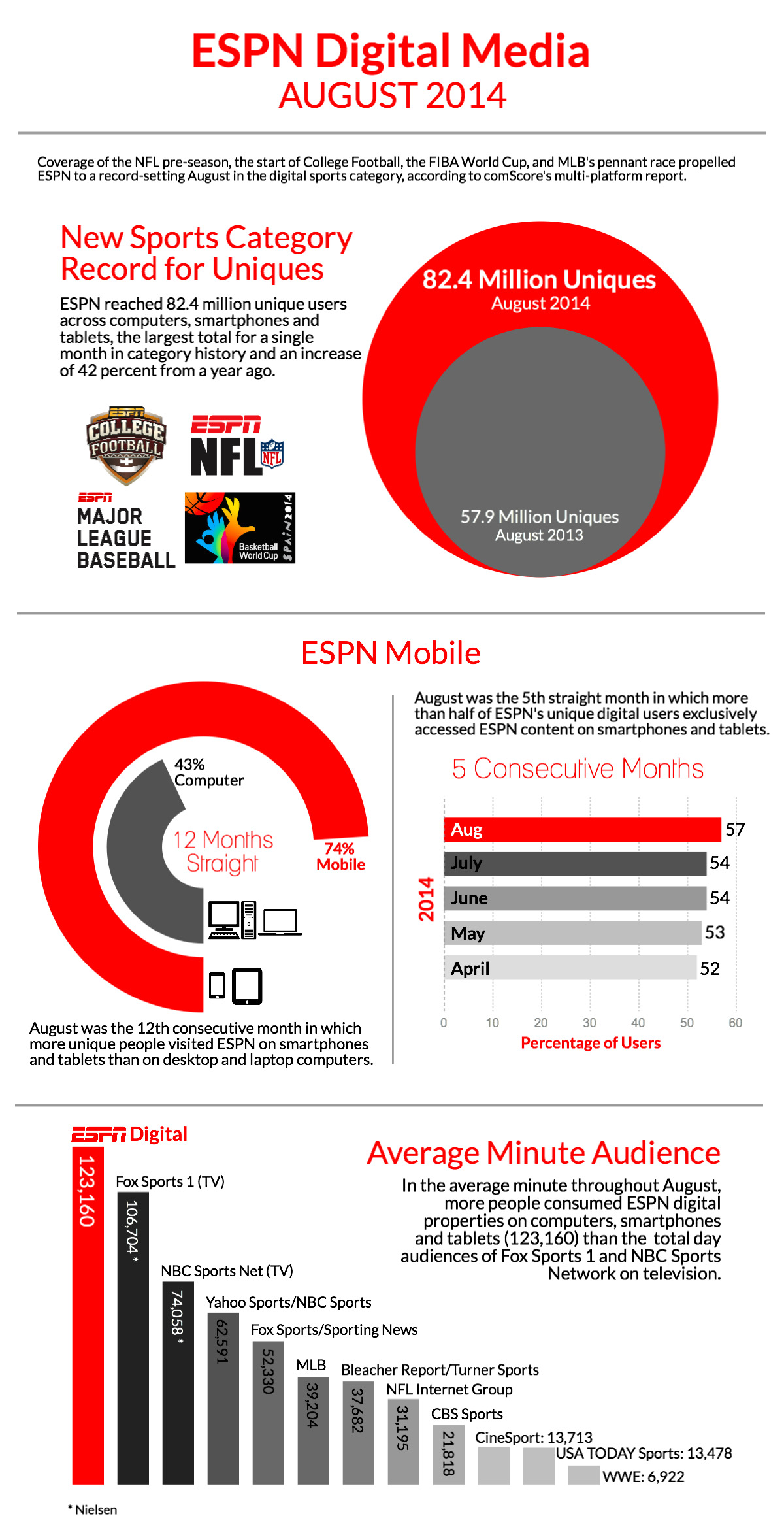 The network reached 82.4 million unique users across computers, smartphones and tablets, the largest total for a single month in category history and an increase of 42% from a year ago. Moreover, according to comScore's latest multi-platform report , on mobile devices alone, 61.3 million unique users accessed ESPN content, setting a category record for mobile reach, fuelled by 42.2 million people visiting ESPN.com via smartphones and tablets.

Fans spent 5.5 billion minutes using ESPN digital properties, a category record for the month of August and up 8% from a year ago. Overall, ESPN accounted for 25.4% of all sports category usage on digital platforms, more than the Nos. 2 and 3 properties combined (Yahoo! Sports-NBC Sports Network had 12.9%, Fox Sports Digital-Sporting News Media 10.8%.)

In the average minute throughout August, 123,160 people used ESPN digital properties on computers, smartphones and tablets – a larger total day audience than Fox Sports 1 (106,704) and NBC Sports Network (74,058) on television. Among males 18 to 49, ESPN digital properties had a larger average minute audience than every Nielsen-measured national cable sports network aside from ESPN and NFL Network.

August was the 12th consecutive month in which more unique people visited ESPN on smartphones and tablets than on desktop and laptop computers (35.1 million uniques, 2.5 billion minutes of usage.) In fact, 55% of all time spent with ESPN digital content was consumed by mobile device users, the seventh time in the past 10 months that smartphones and tablets contributed a larger share of usage to ESPN's digital total than desktop and laptop computers.

From a social media perspective, ESPN networks and ABC sports television content generated 9.4 million tweets in August, accounting for 15% of all TV-related activity during the month. ESPN itself was the third most-social TV network (broadcast or cable) in August, with 1.4 million unique authors sending 4.5 million tweets about ESPN programming. ESPN's top Twitter accounts were retweeted or favourited 7.7 million times, up 150% from a year ago.

Also, 7.1 million people engaged with the ESPN Facebook page (liked a post, shared a story, left a comment), which is up 195% from last year, and 11.5 million also engaged with the SportsCenter page (up 500%).