Antena 3 changes news team | DTT | News | Rapid TV News
By continuing to use this site you consent to the use of cookies on your device as described in our privacy policy unless you have disabled them. You can change your cookie settings at any time but parts of our site will not function correctly without them. [Close]

Aiming to strengthen its current position as one of the go-to news programmes on Spain's DTT, Antena 3 has renewed the team, set and design of its news programming. 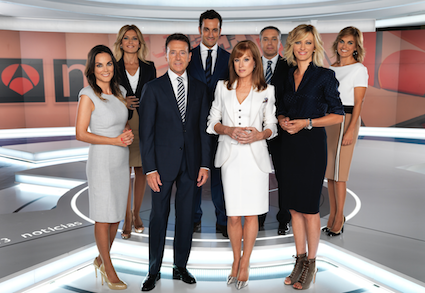 The channel, which topped audience figures in August, will move its most recognisable face Matías Prats to the weekend edition, while bringing fresh presenters to its evening news programme.

Together with Prats, his partner over recent years, Mónica Carrillo, will also move to the weekend edition, while Álvaro Zancajo and Sandra Golpe will present the evening programme during the week. The morning and midday editions will keep their presenting couples, María José Sáez and Esther Vaquero, and Vicente Vallés and Lourdes Maldonado respectively.

The new season will also bring a new heading, new graphic line and a renovated set.

Antena 3 has also launched the new season of Espejo Público, the news magazine presented by Susanna Griso, which will have new reporters on the team.

Antena 3 news programmes have been getting an average share of 14.1% and 1.86 million viewers since the beginning of the year, coming top at weekends as well with nearly two million viewers for its weekend edition.